UFC will not act on the brutal eye gouging in Glasgow

The brutal eye gouging by Santiago Ponzinibbio against Gunnar Nelson in Glasgow will go unpunished and the fight results stands according to disappointing UFC ruling.

On July 16th Gunnar Nelson met Santiago Ponzinibbio at UFC Fight Night 113 in Glasgow for the main event. Official results were KO/TKO by Ponzinibbio 1:22 into the 1st round.

Right after the fight Gunnar complained that Santiago poked him in the eyes multiple times, resulting in blurred and double vision and the loss of depth perception. Pictures and videos of the fight show that Santiago poked Gunnars eyes at least 4-5 times inside the 82 seconds the fight took place. These pokes were all brutal and intense, looked to be intentional, and could easily have blinded Gunnar Nelson or put his career in jeopardy.

Santiago throws his open finger straight out to Gunnars eyes a number of times and pokes each eye at least twice. First, after Gunnar hits him with an uppercut, Santiago double pokes Gunnar in the eyes 20 seconds into the fight.  This is very clear by the pictures below taken by photographer Jerry McCarthy at KO Media. 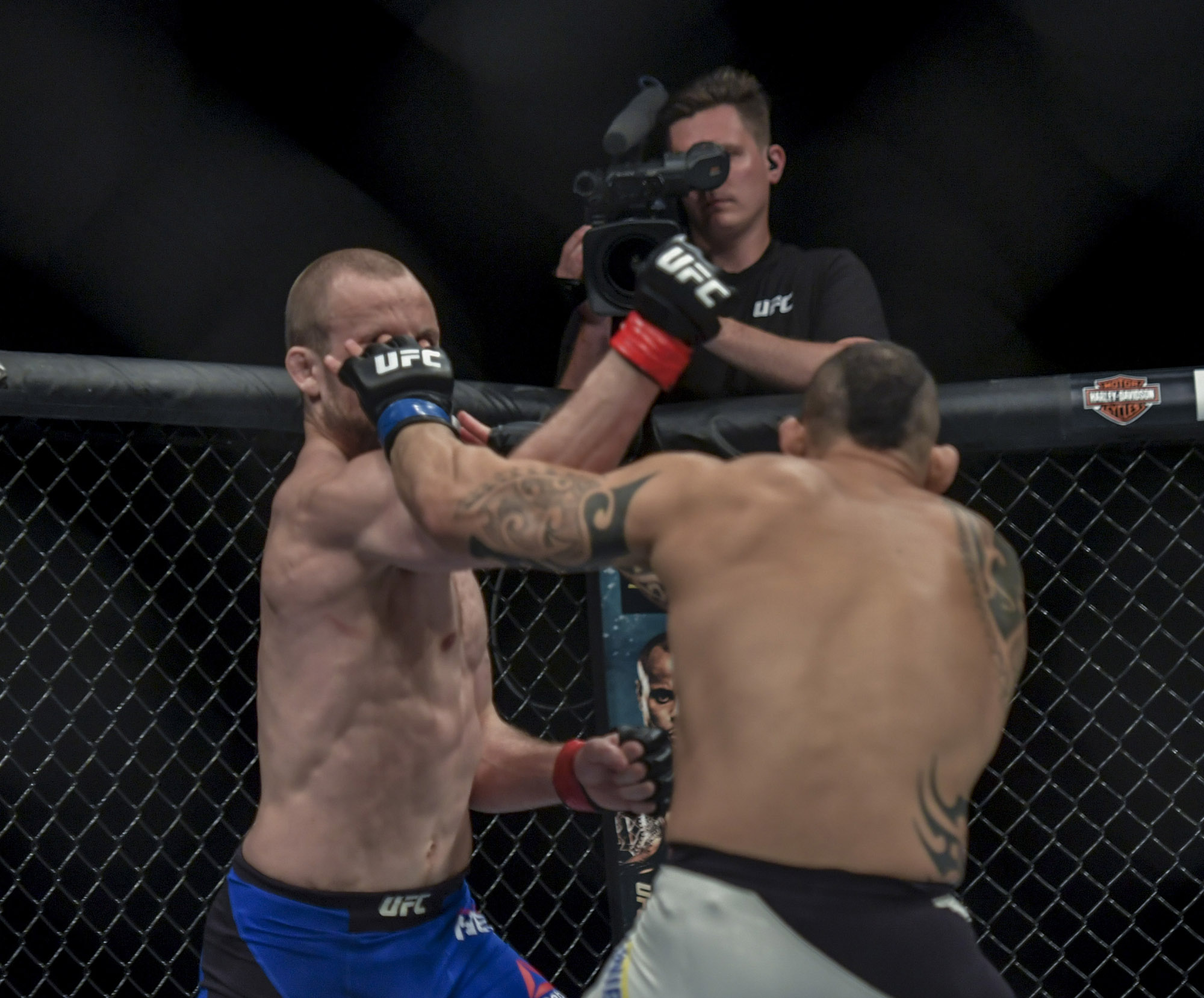 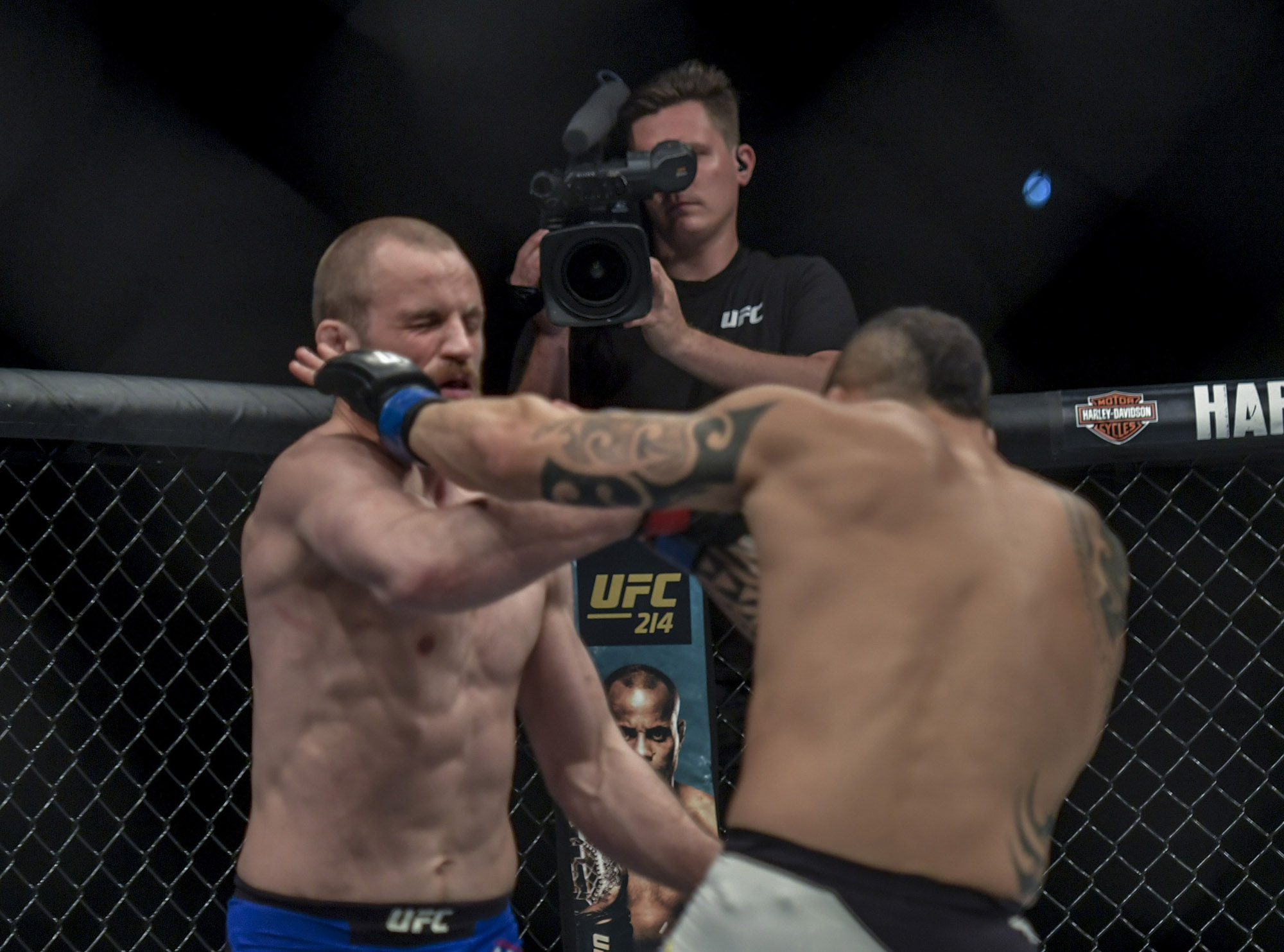 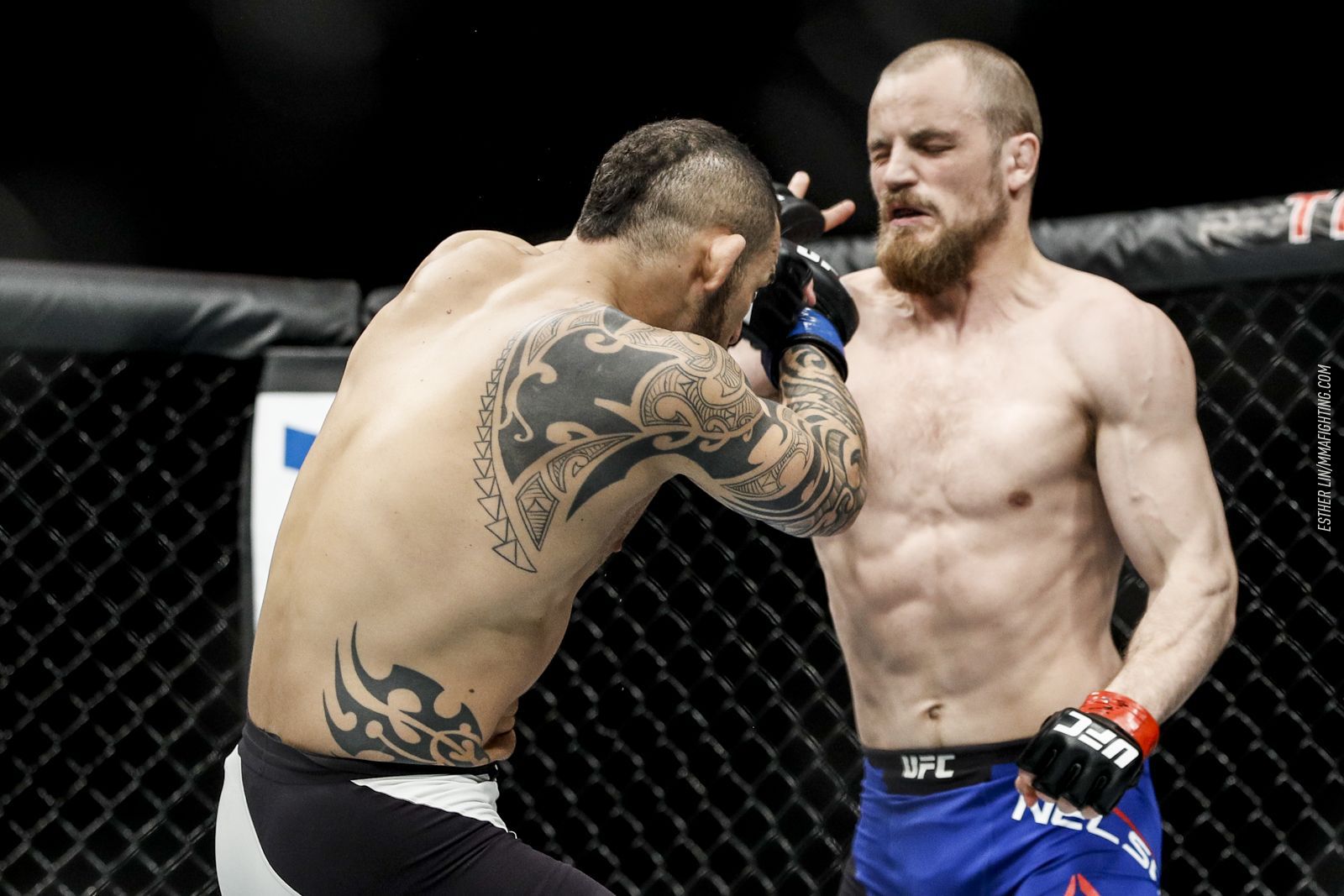 Gunnar says that gave him both blurred vision, double vision and completely took away his depth perception, making it possible for Santiago to land a hook that rocked Gunnar. This is also very visible in the fight as Gunnar tries to wipe his eyes at least twice right after the pokes.

Only 26 seconds later Gunnar throws a right hook and again Santiago sticks his fingers in his face as can be seen in the following snap shoot from the fight. 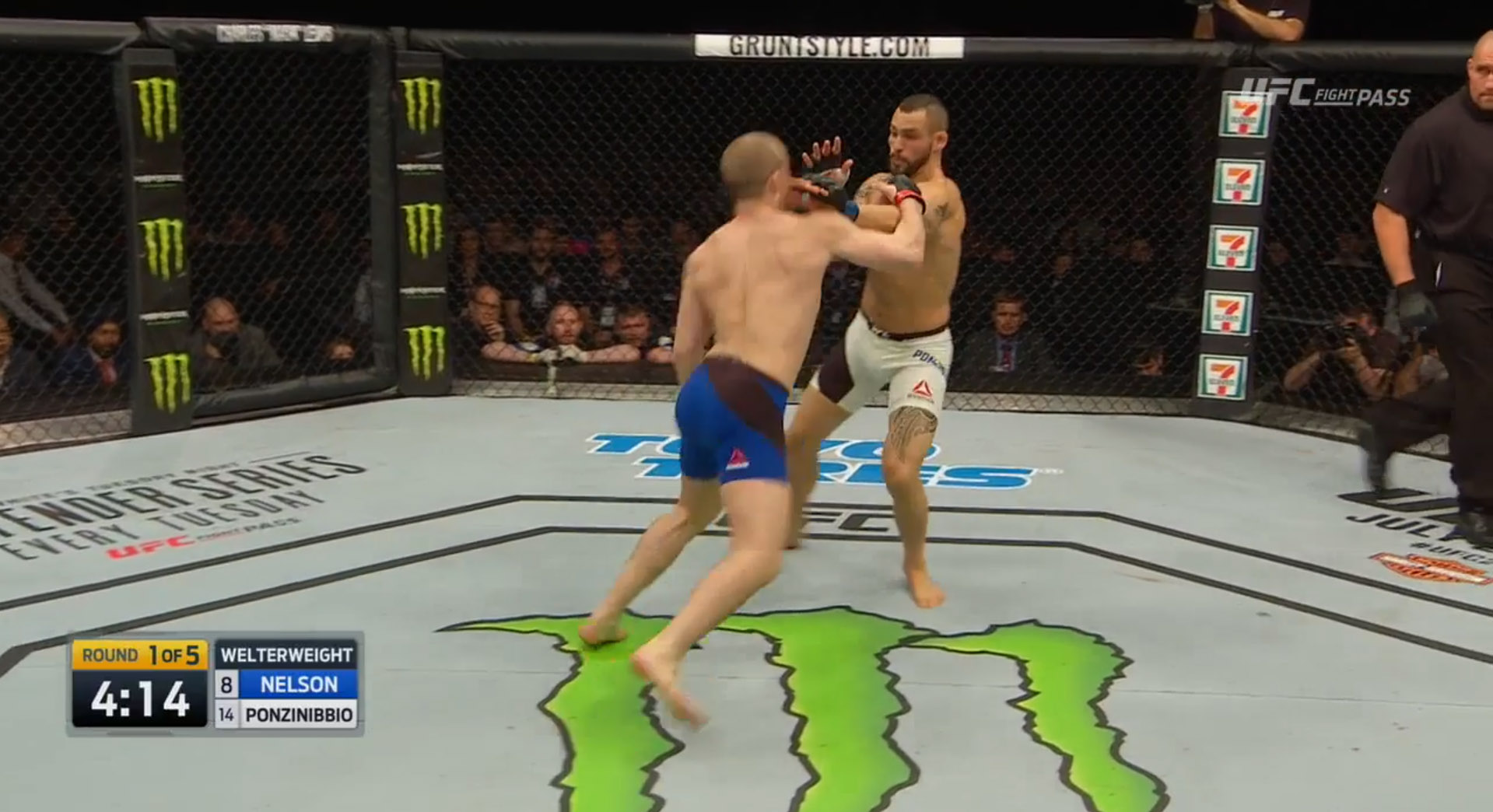 Its hard to tell from this angle if the Santiagos finger pokes Gunnars eyes, but another camera angle would have got it. It is, however, a clear foul of the Extended fingers rule. The Referee seems to be looking at this but gives no warning. This happens again 10 seconds later when Gunnar lands a left hand. Again, Santiago answers with fingers to the face. 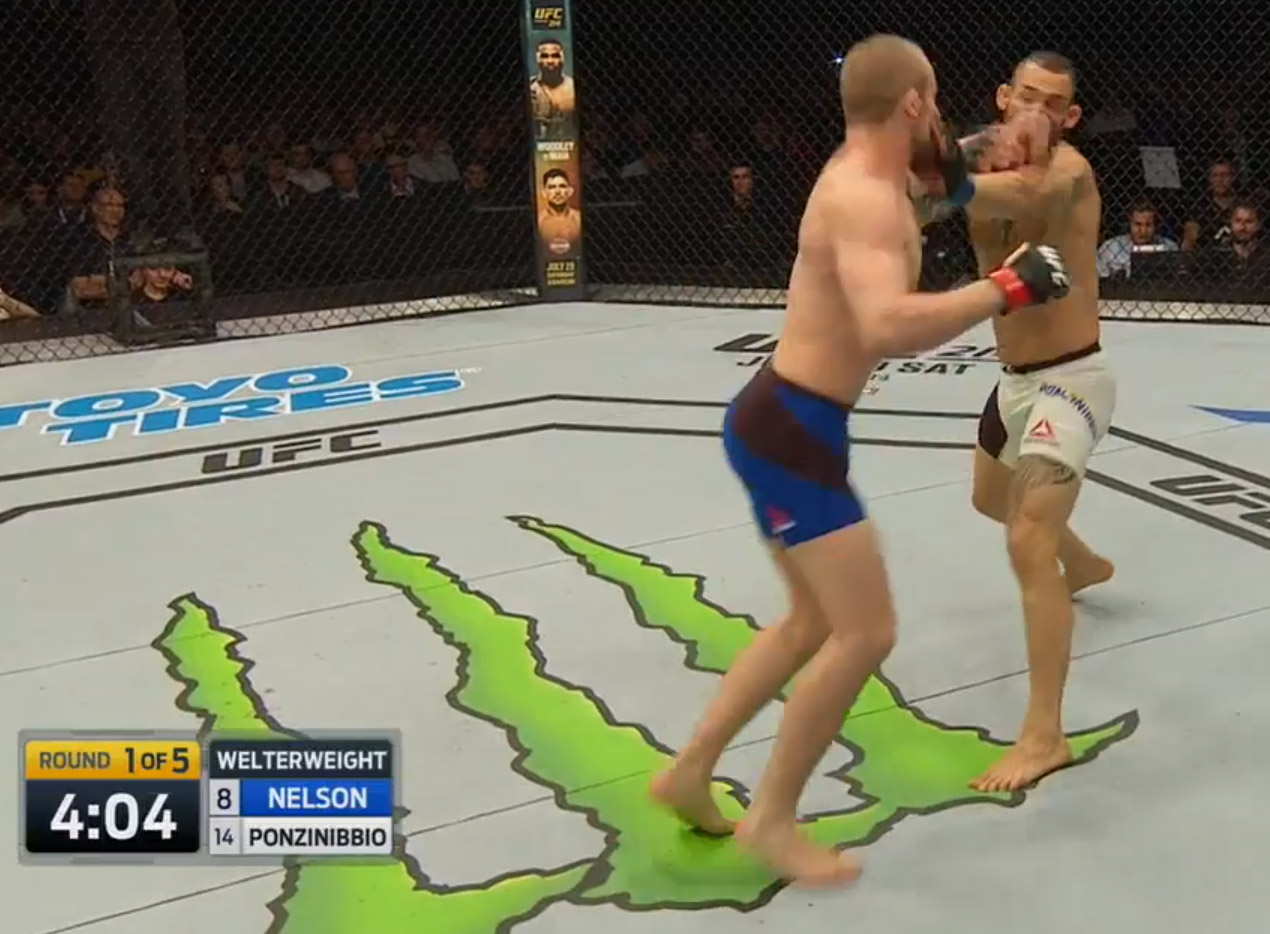 After a hook Santiago grabs Gunnars shorts from behind and again the ref seems to be looking at it without giving any warning. 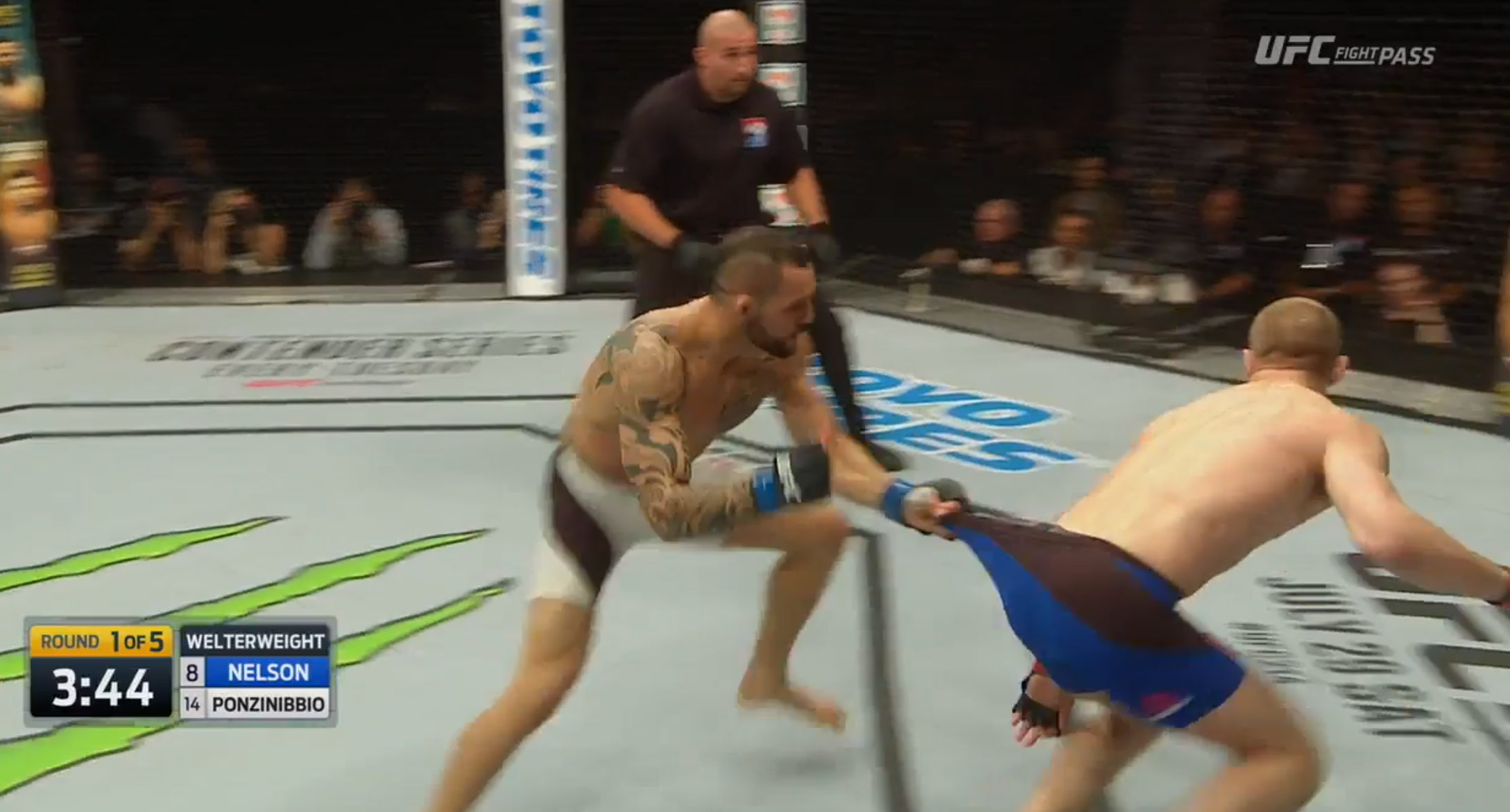 After this flurry, the fighters end up by the cage. Here, Santiago pokes Gunnars right eye and then basically fish hooks his left eye making Gunnar unable to protect himself as Santiago then sets up and lands a blow that knocks Gunnar down and ends the fight two seconds later. 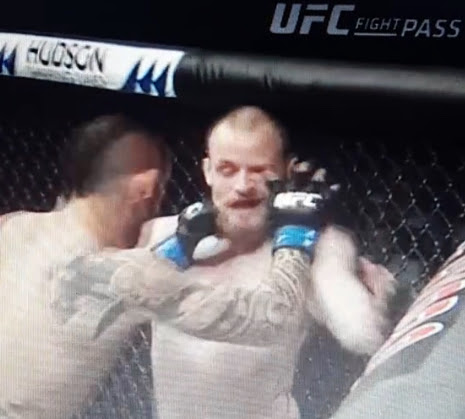 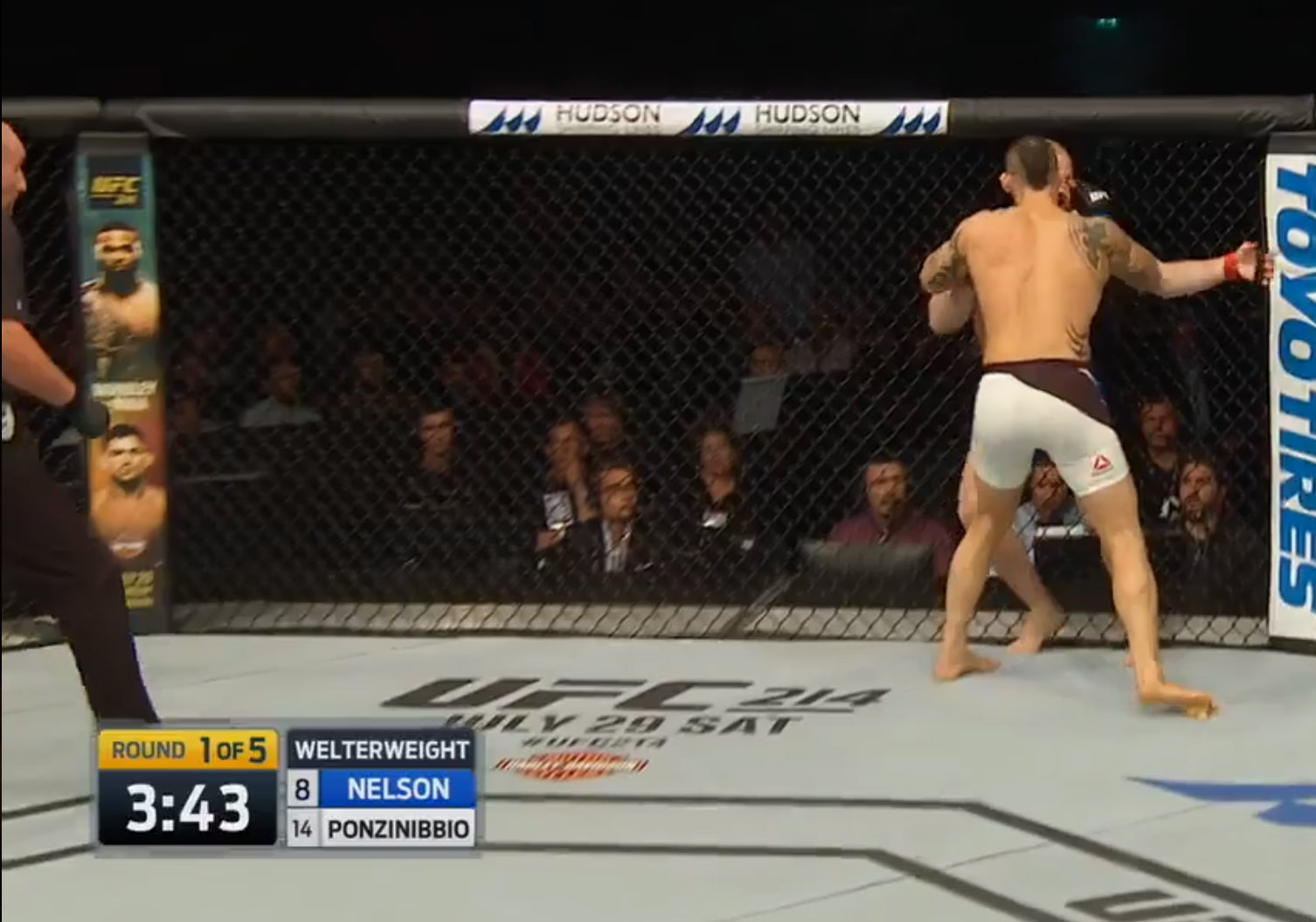 Gunnar had no opportunity to signal the referee for these last eye pokes as punches were coming hard and fast and he was subsequently knocked down second after these pokes occurred. The fight clearly ended as a result of the eye pokes. If the brutal eye pokes above aren't grounds enough for a no contest ruling then in our opinion nothing is.

It should also be noted that in the locker room before the fight, referee Leon Roberts addressed the new rule on extended fingers. That in the standing position, a fighter that moves their arm(s) toward their opponent with an open hand, fingers pointing at the opponent's face/eyes, will be a foul. He also told Gunnar that he liked to keep the tempo of the fight and said that if he saw a foul he would call it in but the fighter should keep the flow of the fight going. We dont know of a single verbal warning he gave to Santiago Ponzinibbio and therefore we must presume that he didnt notice the extended fingers fouls or the brutal eye pokes by Santiago.

On the grounds above, and especially since it was a fight ending foul in the last two seconds, that the referee didn't see, our team appealed for the result of the fight to be turned to No Contest. Unfortunately the UFC ruling was that they did not have grounds to change the results.

Gunnars father (Halli Nelson) said the following on his Facebook after the UFC ruling:

The main concern of the UFC and the Athletic commissions must always be fighter safety and fair play. The offending fighter should bear the burden of responsibility for the foul, not the fighter on the receiving end. And its the responsibility of the referee, the UFC and the Athletic commissions to make sure that fighters obey by the rules and don't jeopardize their opponent's health, safety and career by breaking those rules. The new rule of fingers outstretched toward an opponents face/eyes is one of the most important rules in MMA as it supports the most important one that banns eye gouging of any kind. A rule that has been in effect from the first days of the UFC with the rule of no biting and fish hooking. If one of the fighters had bitten his opponent without the referee noticing and won the fight, the results would likely be overturned. The eye poking incidents in this fight is of much more concern. Eye gouging and poking is extremely dangerous and can lead to career ending injuries to the athlete. There can be no leniency given and it should be dealt with as a high priority. The UFC should have responded to this incident and in my opinion ruled this a no contest to show that safety and fair play are primary concerns and they will not allow eye gouging and poking of any kind at their events. It's sad that they didn't and this will never be a loss for Gunnar nor a win for Santiago Ponzinibbio in my eyes.

Paradigm Sports Management said similar in their statement on this:

We are disappointed with the UFC's recent ruling to uphold the result of the July 16, 2017 bout between our client, Gunnar Nelson, and Santiago Ponzinibbio. While we understand the outcome of a fight is difficult to overturn, we maintain that the blatant eye pokes were a major factor in the stoppage and the final eye poke was certainly a fight ending foul beause Gunnar had no opportunity to signal the referee. A more stringent application of the Unified Rules of MMA should have been applied here to rule this fight a no-contest. We stand behind Gunnar and Team Nelson, and we hope this unfortunate situation will lead to more careful application of the rules regarding eye pokes, as fairness and fighter safety must always be a priority.

And Gunnar's coach, John Kavanagh, did not sugar code his disappointment with the UFC ruling:

Gunnar however was his calm self:

Finally we would like to say that our team did not want to comment on this issue while the appeal process was still taking place, respecting due process and diligent decision making play out. In light of the appeal results, we feel that it is our duty as members of this industry and people who love this sport to shed light on this unfortunate circumstance and improve mixed martial arts going forward.